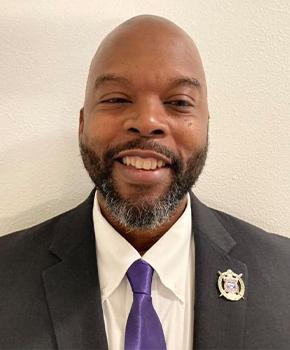 Brother Charles "Chuck" Clemons entered the fold of Omega on February 17th, 1990, "The Twenty Pearls," at Beta Chapter. He and his brothers engaged in mentoring youth and providing food to a local women's shelter in the Oxford, Pennsylvania area. The following year he received Christ his Lord and Savior. He has served and been licensed in the A.M.E.Zion Church (1991), ordained in the Missionary Baptist Church (1996) and also within the Missionary Church, inc.

For over thirty years Chuck has dedicated his life to serving the poor and needy in the Name of Jesus Christ as a Pastor, Aid & Relief worker, as Hospital Chaplain and Minister of the Gospel. It is his privilege to serve locally within Omicron Mu chapter and broadly among the Brothers of the Massive and Progressive 12th District.